With thousands of motorcycle clubs and millions of riders across the United States, 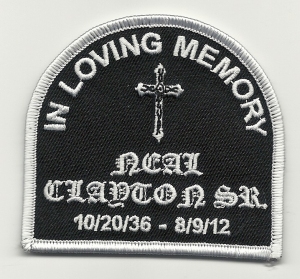 Many motorcycle clubs honor the memory of a deceased member by wearing a custom-made embroidered patch.

a unique way has developed to remember fellow enthusiasts who have died -– a commemorative embroidered patch.

Often displayed on a motorcycle club member’s “colors,” a denim or leather vest worn while riding,

memorial patches are also sewn on jackets, hats, shirts and other riding apparel. Displaying the patch is a permanent reminder of the missing rider and a unique form of respect and feeling that the deceased individual is still “with” the club on the road. His spirit rides on.

Memorial patches are not just used by bike clubs. 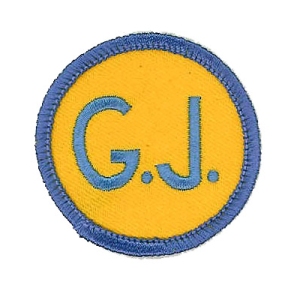 Memorial patches can be as simple as a member or teammate’s initials. Intricate multi-color designs are also popular.

The Chicago Embroidery Company has made them for little league teams, soccer teams and other groups that want to commemorate a teammate or member who is no longer with us. The patch is often displayed on the sleeve of the team’s uniform with the season dedicated to their comrade.

A wide variety of designs can be incorporated into a memorial patch. Chicago Embroidery Co. offers free design assistance to help you create a loving commemrative tribute.

can be purchased in small lots of just a dozen or in bulk of a hundred or more. The Chicago Embroidery Company has worked with motorcycle clubs around the country to create a handsome embroidered patch that honors the memory of the rider in a special way.

For more information about ordering embroidered patches or to get a quote, contact Chicago Embroidery Company at http://www.c-emblem.com or call 312/644-4232.

A number of embroidered patches on this vest show the rider/member’s affiliation, rank, accomplishments and more

Most motorcycle clubs are identified by their “colors,” a unique embroidered patch or set of patches, most often sewn on the back of the denim or leather vest worn while riding.
To join a motorcycle club, prospective members are sometimes asked to perform/endure a set of tasks. During this probationary period, the prospect may wear an embroidered patch, but usually not the full club logo patch.

Once the trial time is completed and a formal membership vote is taken, the final logo patch is then awarded in a ceremony. Club members are often known as “full patch members” or “patchholders” and the membership process known as “being patched.”
The club embroidered patch is usually large for high visibility, 6-12 inches, with the name, logo, chapter (city/state, etc.) and “MC” for motorcycle club. The vest with patches is known as the colors or cut, as early clubs would cut off the collars and sleeves of a jacket to create a vest.

Collecting motorcycle club patches can be difficult as the patches are considered property of the club and only members are allowed to wear the club’s patches; losing/selling/trading one’s colors is considered the ultimate disgrace. Non-members affiliated with the MC may wear support patches with the club’s colors, but not the actual member logo.
The colors worn by MC members sometimes use a system of a single patch for nonconformist social clubs, with a two piece patch for dues-paying members and a three-piece patch for so-called “outlaw” clubs (those who are not members of the American Motorcycle Association, AMA). A three-piece patch typically consists of the club logo with top and bottom patches, usually crescent shaped, known as “rockers.” The exact number and layout of these embroidered patches varies from club to club and a three-piece patch system doesn’t necessarily mark an MC as outlaws.

Some outlaw motorcycle clubs are readily identified by a 1 percent (%) patch worn on the colors, referring to the AMA’s purported statement that 99 percent of motorcyclists are law-abiding citizens, therefore identifying the remaining 1 percent as non-conformist outlaws.
There are all types of different clubs, most of them the “99%”, and include clubs dedicated to certain types of motorcycles, clubs that like to ride long distances, racing clubs, and even clubs of police officers or medical first responders.
The Chicago Embroidery Company has made club patches for all sorts of clubs in addition to the American Motorcycle Association. For more information visit http://www.c-emblem.com