Here at The Chicago Embroidery Company, we’re excited that the fashion patch craze shows no signs of abating, as evidenced by this recent Huffington Post piece , a profile of a Swedish band sporting patches on their denim and an Aimee Farrell story from last month’s NY Times Style Magazine: 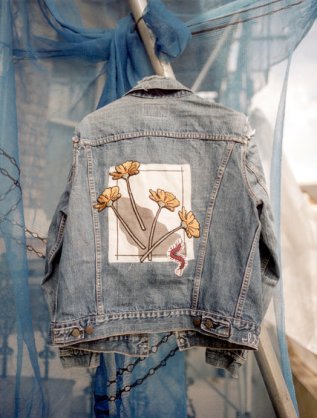 “Patches have always been symbols of identity,” says the illustrator Christabel MacGreevy. “They’re a way of marking allegiance and signing up to something, whether it’s your school, the band you like or a 1970s motorcycle gang.” MacGreevy, 25, is herself outfitted in patches on a recent morning in London: her black jeans are worn with a baseball vest that has the word ‘chic’ stitched onto the front. She is discussing the ethos behind Itchy Scratchy Patchy, the playful line of decorative patches — and now clothing — that she co-founded with her lifelong friend, the British model Edie Campbell, a year ago. Decorated with brightly stitched marigolds, toadstools, centipedes and sumo wrestlers, her leather biker jacket, which is nonchalantly slung over the back of a chair, is a vivid scrapbook of the brand’s embroidered iron-ons, which have become popular with Courtney Love and Gigi Hadid. 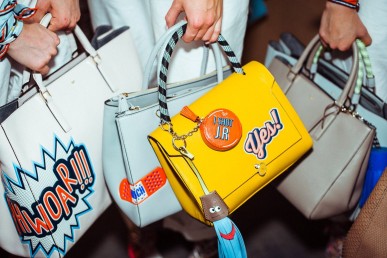 serve as a counterpoint to the irreverent aesthetic of the brand — which began on a whim, and without outside investment, as an antidote to the samey, normcore looks that have become so dominant. The marble-topped kitchen table is littered with laptops, phones and safety pins, all the accoutrements of their self-described cottage industry. Even Campbell’s nearby West London apartment has become a makeshift storage unit for the pair’s latest project: An 85-piece clothing collection of vintage Levi’s denim and Sunspel T-shirts, all lovingly embroidered, patched and painted in their inimitable decorative style, which goes on sale this weekend at London’s Dover Street Market. It’s the first time the pair have ever produced a capsule of clothes bearing their own iron-on designs — as a way to show how Itchy Scratchy patches can be worn and styled. 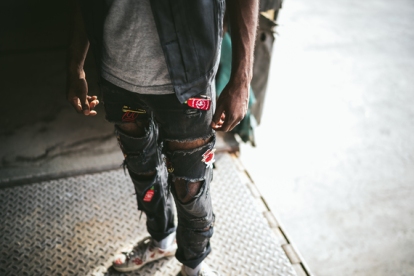 mountains of fabric at recycling plants in search of the perfect Levi’s jean jacket or touring the meticulous T-shirt production line at Sunspel’s factory in the north of England, a youthful energy pervades everything they do. For the last two months, they have been embellishing the pieces they hand-sourced — including Levi’s jeans from the 1980s and 1990s, denim jackets and plenty of reworked monochrome Sunspel tees. Picking the pieces, Campbell says, was simple: “If we wouldn’t wear it ourselves, it doesn’t get made.” She continues: “We’ve both studied the visual arts, so we’re decisive and confident about what we like. We know what works, even if we don’t know why. It’s not like we’re trying to push the future of fashion forward — this is about having fun.”

Campbell’s experience inside the industry (she was first discovered by the photographer Mario Testino a decade ago) allows her an innate understanding of fashion that comes in handy when shooting the collections, though she’s the first to admit that styling clothes is very different from designing 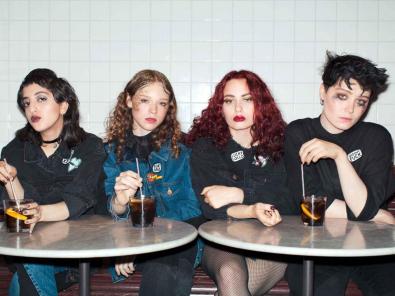 and producing them. “There’s no database, it’s a case of calling everyone you know and saying ‘help!’” says Campbell. She credits the British designer Henry Holland with helping to make Itchy Scratchy happen. “He let us sit in on a production meeting at his factory where we produced our first patches. We may never have done it without him.”

This week, between taking the Eurostar to Paris, where she opened and closed Chanel’s fall couture show, Campbell could be found in MacGreevy’s Camberwell studio sorting out logistics and stitching on labels (every piece is sewn with its own edition number, she says, proudly). Luckily, and somewhat unusually in fashion, they’re both early risers: “If I haven’t had a text from Edie by 7 a.m., it feels weird,” jokes MacGreevy, the originator of the brand’s trademark cartoony figures, who studied Fine Art at Central Saint Martins. At times of stress, MacGreevy often finds herself furiously pinning and cutting things out. Campbell takes a different tack, seeking solace in more surprising quarters: Excel spreadsheets. “I love them!” she says, her voice raising an octave. “When everything starts getting out of control, I find it soothing.”  Itchy Scratchy Patchy, $85-$325, launches at Dover Street Market July 9, doverstreetmarket.com
___

But don’t fret fashionistas, you can create a contemporary look for your line for much less than you might imagine.  The Chicago Embroidery Company sews custom embroidered emblems, based on your design. Send image for free quote.  sales@c-emblem.com, http://www.c-emblem.com or call 312/664-4232.  NOTE: Individual patches are not sold, the company manufactures emblems in quantity.